I actually managed to read this book last month (SNEAKILY FINISHING IT ON THE LAST DAY EH??? 😉 ) 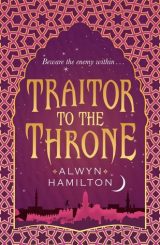 Gunslinger Amani al’Hiza fled her dead-end hometown on the back of a mythical horse with the mysterious foreigner Jin, seeking only her own freedom. Now she’s fighting to liberate the entire desert nation of Miraji from a bloodthirsty sultan who slew his own father to capture the throne.

When Amani finds herself thrust into the epicenter of the regime—the Sultan’s palace—she’s determined to bring the tyrant down. Desperate to uncover the Sultan’s secrets by spying on his court, she tries to forget that Jin disappeared just as she was getting closest to him, and that she’s a prisoner of the enemy. But the longer she remains, the more she questions whether the Sultan is really the villain she’s been told he is, and who’s the real traitor to her sun-bleached, magic-filled homeland.

Forget everything you thought you knew about Miraji, about the rebellion, about Djinn and Jin and the Blue-Eyed Bandit. In Traitor to the Throne, the only certainty is that everything will change.

So this book had a great beginning, I was so obsessed with itttttt. I liked how it didn’t necessarily pick up straight after the first book, too, dunno whyyyy, just a random opinion I have. BUUTTTTTTT, I adored how things weren’t hunky-dory with everyone, and how things went downhill rather quickly. This literally made me scream,

as I was reading. This actually happened, IN PUBLIC.

HOWEVERRRRR, I did feel like the middle lagged a bit, and it was a lot of things that just,,, weren’t particularly interesting and… yes, shocked me, but the pace of these things was slow. It was exciting…. but slow.

and I was thinking, “ are they really the good guys??” and “is he really that bad?? He did these bad things,,,but surely???” and then I would come back to my senses and realise that I was being stupid and needed to just get my brain back in gear.

I had similar thoughts to the first book at points, especially in the middle, where I was thinking, “where is this going?” but on the whole I think that the book was much more directed than the first, perhaps because we had already discovered this world and we had a clearer visual on what was going on in the vast scheme of things.

The WORLD was so vivid too. I could picture LITERALLY EVERYTHING. The whole world seemed even better and more magical and brilliant than in the first book.

ANNNNND, in the first book we had all these tales from Amani’s world, and they continues into this book and I loved them sosososososo much.

In the middle, when things were slow –yes, is where I probably felt the most sad for her. And the end of course. But the middle!!!! I can’t explain without SPOILING the book for people who haven’t read it, but GAHH I want to just explaiinnn everything.

BUT IT MUST HAVE BEEN so awful for her.

I didn’t understanddddd why he did things but then HE REALISED THAT HE WAS BEING A SILLY BEAN AND DID THE RIGHT THING AND WAS ACTUALLY GREAT.

ANNNDD, I fully realised just how ABSOLUTELY FABULOUS he is in this book because in sosososoooooo many fantasy books the guy is always like “macho macho macho must protect female to point of controlling her”

BUT HE WASNTTTT and this literally made me be like, “JIN, YOUSMOLBEAN,” and yeahhhhhhhh just amazenesss.

(that’s not even a word but let’s just ignore that fact).

I’m actually going to end the review here, and if there’s anything that you wanted to talk about, just comment and we can CHAT.

1 thought on “Traitor To The Throne Review.”

A Room Without Books is Like a Body Without a Soul

my1stchapter.wordpress.com/
Ink & Myths
Read Between the Skylines
Flowers In The Brain